BVHP in MOVIES, TV and MEDIA

Starring Tony Curtis, some scenes in the film were shot in Bayview.

The St. Joseph Orphanage Asylum, originally located at Revere/Newhall, is the site of several set-ups.  The All Hallows Chapel, at Newhall/Palou is also used in the funeral scene.   1957 in Bayview.

KQED's mobile film unit follows author and activist James Baldwin in the spring of 1963 as he's driven around San Francisco to meet with members of the local African-American community.  James Baldwin in Bayview 1963.

Point of Pride: The People's View of Bayview/Hunter's Point is a documentary film about the Bayview Hunters Point neighborhood. Point of Pride combines archival footage from the 1950's 60's and 70's with present-day viewpoints and reactions to these images from the past to create a compelling portrait of a community marked by struggle and fueled by hope.

An ex-police officer who suffers from an intense fear of heights is hired to prevent an old friend's wife from committing suicide, but all is not as it seems. Hitchcock's haunting, compelling masterpiece is uniquely revelatory about the director's own predilections and hang-ups and is widely considered to be one of his masterworks.   Some scenes were filmed in Bayview.

A troubled salesman who peddles knives, Gil Renard (Robert De Niro) has a volatile personality, which has resulted in divorce and a strained relationship with his young son. The one thing that Renard cares passionately about is baseball, particularly the San Francisco Giants and the team's newest recruit, Bobby Rayburn (Wesley Snipes). As Renard's personal life continues to crumble, he begins obsessively tracking Rayburn, leading to kidnapping and even murder.  Scenes were shot at Candlestick Park in Bayview.      1996

Nick (Ben Crowley), a white mailroom clerk who rips off his coworkers' credit card numbers on the side, moves to a mostly African-American neighborhood and is terrorized by a local gang called the V-Dubs. He befriends K-Luv (Anthony Mackie), a black gang member to whom Nick helps sell bootlegged CDs, and they soon build a relationship with Lincoln (Ken Leung), a low-level Chinese gangster. But tension becomes palpable as the trio begin committing crimes on one another's turf.   Scenes were shot in Bayview.

When Beth Emhoff (Gwyneth Paltrow) returns to Minnesota from a Hong Kong business trip, she attributes the malaise she feels to jet lag. However, two days later, Beth is dead, and doctors tell her shocked husband (Matt Damon) that they have no idea what killed her.

Jimmie and his best friend Mont try to reclaim the house built by Jimmie's grandfather, launching them on a poignant odyssey that connects them to their past, even as it tests their friendship and sense of belonging in the place they call home.

Two wisecracking plain-clothes San Francisco policemen discover that there is a contract on the life of the suspect they have been tailing. The pair decide to act as bodyguards until they can get a warrant to pick him up, but plans for a clean arrest go spectacularly wrong, and the two cops manage to bring the city to a virtual standstill.     With James Caan,  Alan Arkin,  Valerie Harper

Senator Walter Chalmers (Robert Vaughn) is aiming to take down mob boss Pete Ross (Vic Tayback) with the help of testimony from the criminal's hothead brother Johnny (Pat Renella), who is in protective custody in San Francisco under the watch of police lieutenant Frank Bullitt (Steve McQueen).   Some scenes were shot on Pier 70 in Potrero Hill and in the backland Piers 92-96 in Bayview.   A classic San Francisco film.

KTVU news footage from May 10th 1967 featuring scenes of US Senators Robert Kennedy and George Murphy describing their impressions of housing in San Francisco's Bayview Hunters Point neighborhood as they walk along a street. Continues with views from a public US Senate Committee hearing about the relative impact of the Federal Poverty Program on Bay Area communities, at the Bayview Community Center on Third Street in San Francisco. Featuring testimony by representatives of Bayview Hunters Point, including Osceola Washington, Harold Brooks and Suzanne Cook. Oakland's Mayor John Reading and San Francisco's Mayor John Shelley also answer questions. Opening graphic designed by Carrie Hawks.

Please note: copyright to Take this Hammer is held by WNET. All rights reserved. WNET is the premier public media provider of the New York metropolitan area and parent of public television stations THIRTEEN and WLIW21.

TAKE THIS HAMMER  was originally produced by KQED for National Educational Television (NET) - the predecessor of WNET - and first aired on February 4th 1964 at 7:30pm, on KQED Ch.9 in the Bay Area.KQED's mobile film unit follows author and activist James Baldwin in the spring of 1963, as he's driven around San Francisco to meet with members of the local African-American community. He is escorted by Youth For Service's Executive Director Orville Luster and intent on discovering: "The real situation of Negroes in the city, as opposed to the image San Francisco would like to present." He declares: "There is no moral distance ... between the facts of life in San Francisco and the facts of life in Birmingham. Someone's got to tell it like it is. And that's where it's at."

At the  Club Long Island Third/McKinnon.  We're working on locating still images and news on this known history. Stay tuned.

a still image and poor sound, but we're working on locating archival footage

BILL CLINTON on Third Street in 2016

At the Joe Lee Gym campaigning for Hillary 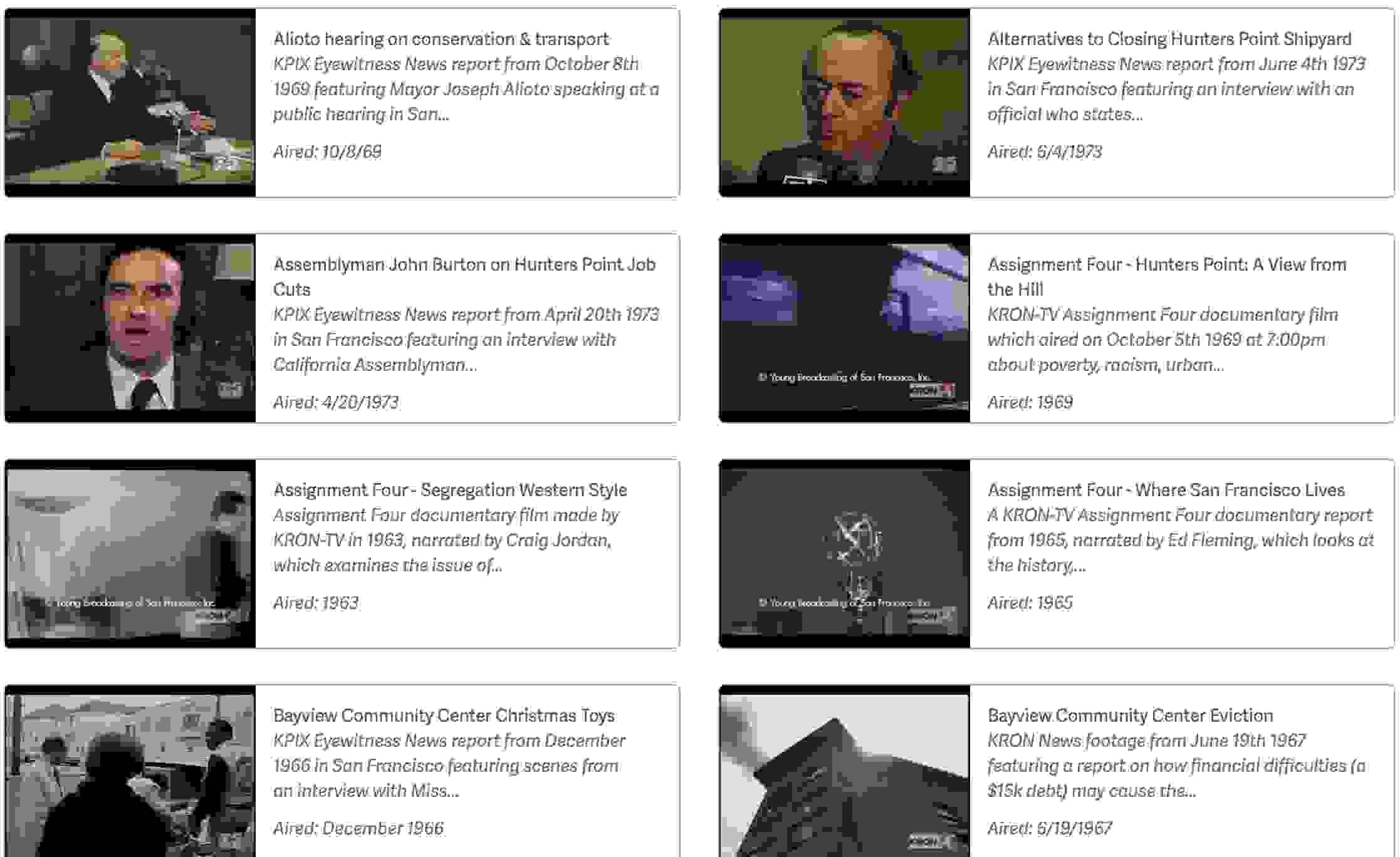 Established in 1982, the TV Archive preserves 6000 hours of newsfilm, documentaries and other TV footage produced in the Bay Area and Northern California from the Twentieth Century. We are a part of the J. Paul Leonard Library's Department of Special Collections and oversee material owned by local TV stations KPIX-TV, KRON-TV, KQED and KTVU. The Bay Area TV Archive’s digitization projects are supported in whole or in part by the U.S. Institute of Museum and Library Services under the provisions of the Library Services and Technology Act, administered in California by the State Librarian.

SIGHTS and SOUNDS of BAYVIEW