This FREE search allows the viewer to locate a public artwork and gain additional information on the artist, the origin of the piece, etc.  Open the view, click on a spot and review the details. You are not tracked!  This is a simple search tool.

An expanded mapping is underway to identify locations of architectural significance in the community.

artBAYVIEW is an evolving directory and interactive geo-mapping and advocacy project for the recognition and retention of public and private art sites in the Bayview-HuntersPoint community of San Francisco, California USA.  Although the identified locations represent a small sampling of art and creative activities in Bayview, and focuses primarily from the late 1970 to present, artBayview also recognizes the rich, varied, and broad creative tradition present in Bayview-Hunters Point since the late 19th Century.

artBayview is, variously, conceptual + intentional + virtual and is formed as a collective of thought and action rather than as a group, per se. No one owns it. Actions are not intentionally disruptive. We work peer to peer to get it done.

These efforts follow and track the creative initiative by countless individual artists, art collectives and organizations that originate and/or call BVHP home, such as:

Example:   ART94124 was started in 2008 and continued in earnest through 2010, with meetings held at Javalencia Cafe'.  Local designer/artist Sam Fleming Lewis  developed the logo and artist Sarah Stangle made the first flyer.  Over the  initial period, 18 exhibits featured the work of 365 artists, displayed 1073 pieces of artwork, and produced 58 accompanying openings, events, and gatherings.

an Indian dance troupe, multiple musical acts, the doggie diner heads, and featured participants like Bayview-based Cyclecide and their

“pedal-powered kinetic sculptures” and the Flaming Lotus Girls and their fire-based creations.

The project was also part of  Art in Storefronts, a pilot program launched by the Mayor’s Office to place original art in vacant storefronts. Initiated by the Office of Economic and Workforce Development and the San Francisco Arts Commission, the program engaged local artist in reinvigorating neighborhoods and commercial corridors. A project was called “Working Artist | Artist Working,” was a video installation that was on-view in 2 different storefronts on 3rd Street for many months, and an exhibit at the ART94124 GALLERY that showcased work from the artists featured in the videos. The trailer for the project can still be seen here:

The video installation was also later displayed during Open Studios at Hunter’s Point Shipyard and at the Bayview Opera House.

Some of the consistent key players were:

ART94124 artists continue to create in and beyond the BVHP community.

We honor and celebrate their work.

Beginning in 2014,  BHPflex  projects created and plotted the artBAYVIEW mapping with the intention of identifying  the artists, public sculpture and murals, studios, galleries and other art sites in the area.   Utilizing the Carto.db toolbox, the project was initiated by BHPflex with assistance from Marianna Blondet, a Fulbright scholar from Peru who took time from  completing her Masters in Urban Planning at UC Berkeley to work with us in BVHP.  Thank you, Marianna.

The project is privately supported by Anonymous Lagniappe  and operates without public funds or grants.    No one is paid to develop the  site, and the  service provided is also free to viewers/users.

Visit artBAYVIEW  and send your suggestions for additional locations or edits. 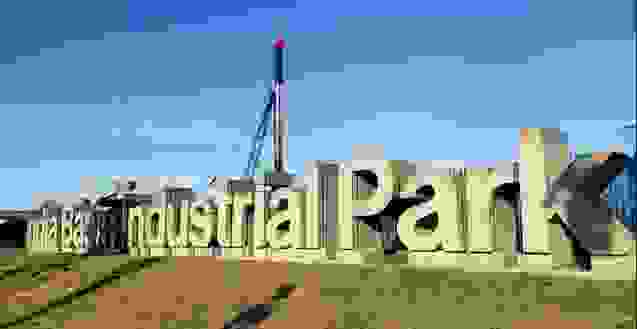 INDIA BASIN INDUSTRIAL PARK sign will be preserved for the community

Since 1976, this iconic graphic art signage has stood along Third Street at Evans Avenue.   The cultural significance as an artwork/asset in the neighborhood is clearly recognized and valued. This piece represents a moment in time (40 years worth) and has become an identifier in the Northern Gateway.

In order to provide for the expanded landscape design around the new Community Center at 1550 Evans, the  the letters were to be removed and either discarded or relegated to memory.

Following outreach by the Southeast Facility and BMagic,  the India Basin Neighborhood  Association, Bayview Historical Society and artBayview quickly collaborated  on a plan that included communication with the original artist for the work, Michael Manwaring, the lead  fabricators-Western Art Stone, and others.  An immediate response in support of retaining or re-purposing the artwork came from a cross section of Bayview leadership and long-time advocates.

Beginning in July,2020, the SFPUC will begin removing the letters for purposes of safe storage through May, 2021.  A current goal of the working group of advocates is a re-purposing and adaptive reuse of the letters contained in the original signage.  It has been suggested by many that a portion of the sign - 'India Basin Park' - be reinstalled at the India Basin Shoreline Park area, now under rehabilitation and expansion.  The remaining 'Industrial' lettering may be realized for use at the ART colony on HuntersPoint Shipyard, or portions used along the Bay Trail, etc.  Efforts are underway to relocate and creatively reuse the letters within the community.

“ Here is the history as I remember it. Landscape architect Bob LaRocca called me in 1976 and asked if I was interested in doing a simple Identification sign for an industrial park. I said yes. He sent me a site plan; I visited the site and did a drawing and sat on it for a couple of days because I knew that it was going to look small out there. So I did a Plan B sign (large free standing letter forms painted red).  I met with Bob and two people from the city and showed them a posts and panel sign. It was about 4x8 or 5x10, Red with white typography, clean and snappy looking. They liked it and said they would get back to me. At that point I pulled out my Plan B sign drawing.   They were silent at first, but then asked me what were the letters made of, and what did I think they would cost.  They asked me to leave both drawings with them.

Bob called me a few days later and said they wanted to go with Plan B, and to get him the graphic artwork as fast as possible. During fabrication I made a trip out to Western ArtStone to look at the first pieces. They were beautiful! It was at that point, I started to have doubts about painting them red. It turned out that Bob was also having some doubt about the Red. So that was the end of the Red. Bob took care of all the technical, engineering, construction, installation, meetings, etc. It was pretty simple for me.

The 1960s saw an evolution in graphic design. Like in the 1950s, you still had Saul Bass creating movie posters and a lot of earth tones dominating advertisements. However, changes were happening – from Paul Rand in 1960 modifying the IBM logo he designed in 1956 to LSD-inspired psychedelia adorning record sleeves and concert posters.

Alan Fletcher and Erik Nitsche gained prominence for their branding campaigns, whereas Keiichi Tanaami dipped his artistic wand into animation, lithograph, illustration and editorial design. The styles of the various graphic designers of the ’60s show a distinct contrast, with some holding onto the staid and prim style of the 1950s while others delved into experimentation – with and without mind-altering substances.

Special THANKS to these local leaders for the initiative and advocacy in support of SAVING this community Artwork ! 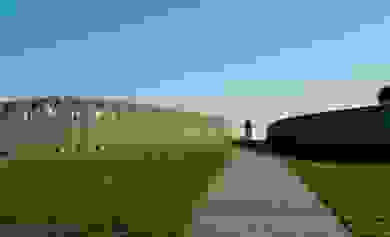 George Hargreaves, environmental artist Doug Hollis, and architect Mark Mack collaborated together to create the Candlestick Point Cultural Park, an eighteen-acre park on San Francisco Bay from 1985 to 1993 and which once was a gravel bed.
Sponsored by the Office of the State Architect, the Department for Parks and Recreation, and the California Arts Council, this project was awarded in November of 1985 to Hargreaves Associates, Mack Architects, and Doug Hollis. In selecting this team and establishing this collaborative effort, the sponsors began a process that took a fresh approach to architecture, landscape, and art.

This park is entered through the “wind gate”, a narrow opening that is secured by 130-foot-long concrete walls.A visitor can feel a strong wind from behind and hear a whistling sound from the “wind gate’s” walls while he is walking toward the bay through the “wind gate”.
The ‘U’ shaped paths to the shore are bounded by aeolian mounds and wet tidal channels.24 The landforms’ “backslope”concaving toward the wind and the “slip face” convexing on the leeward create a habitat for varied plant growth.


The wind is the theme of the park. When the wind blows, it feels like a welcome signal to attract people. This park possessed a series of interactions, movements, and engagements with the environment and a force that engages visitors’ motions by changing boundary between land and water.  Visitors can focus more on its spatial view and the connection with natural power rather than beautiful scenery, as Hargreaves has said "various elements such as water, wind and gravity can enter and affect the landscape". Three factors, earth, wind and water, interact together to form a "environmental Theatre" that focuses on the contrasts between cultivated and the natural view. When visitors are walking through this "environmental Theatre", they can veiw the different pictures created by former, mowed and green plants and the latter, rough and tawny plants.
LA Times 1993

More on this project:
http://www.hargreaves.com/candlestick-park/

Although Candlestick Park Stadium is no more, the landscape project at Candlestick Point Park endures, yet needs restoration and maintenance. Will you join us in recognizing and protecting this Bayview asset?

THIS ARTWORK and PROJECT is decaying.

Although Candlestick Park Stadium is no more, the landscape project at Candlestick Point Park endures, albeit precariously, and requires restoration and maintenance. Will you join us in recognizing and protecting this Bayview asset?

Contact us at: Bayview Historical Society and artBayview and help to develop a plan. 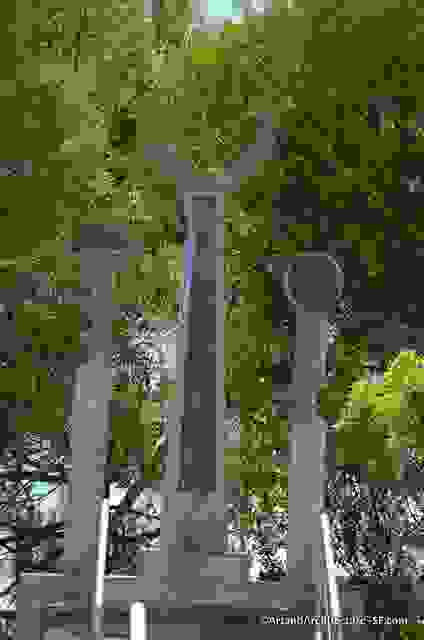 "The Zimbabwean Ndebele language, also called Northern Ndebele, isiNdebele, Sindebele, or Ndebele is an African language belonging to the Nguni group of Bantu languages, and spoken by the Ndebele or Matabele people of Zimbabwe.

isiNdebele is related to the Zulu language spoken in South Africa. THE ARTIST: Fran Martin received her M.A. in Art in 1973. She fabricated and exhibited sculpture until 1995. Since 1994, she has been co-founder of and ardent worker at the Visitacion Valley Greenway Project (VVGP). Commendation from San Francisco Board of Supervisors: December 8, 2001 WHEREAS, Fran Martin is a Visitacion Valley community leader and activist on land use, planning, and environmental protection issues, and has demonstrated commendable civic mindedness in her continued efforts as a strong advocate of planned growth for her neighborhood while preserving its unique community; and, WHEREAS, Fran Martin has shown exemplary leadership in her community through her work with the Visitacion Valley Planning Alliance and the Greenway Project; and, WHEREAS, Fran Martin has been a persistent advocate, visionary artist, and active citizen in the Visitacion Valley neighborhood, now, therefore, be it, RESOLVED, That the Board of Supervisors commend Fran Martin's commitment to protect and enhance her neighborhood and for her continuing efforts to strengthen the neighborhood voice in San Francisco; and, BE IT FURTHER RESOLVED, That the San Francisco Board of Supervisors salutes Fran Martin for all her hard work by proclaiming the 8th of December Fran Martin Day."

Additional information on this work can be viewed on the artBayview mapping site. Scroll to the location and click to view details. There is no need to sign in or subscribe to utilize this mapping.

Installed in 1987, this sculpture is by artist, Fran Martin. It can be viewed (barely, through the weeds and behind a locked gate) at the end of Shafter Avenue, East of the Griffith Street pump station- BVHP.   Fran remains very active in community planning and environmental leadership in Visitacion Valley.   Join BHS and artBayview in our efforts to improve the project site and to provide access to viewing this largely unknown, but substantial work in Bayview. Please contact us to find out how.  www.artbayview.org